In the wake of the surge in onion prices, the central government says it plans to raise production at least two-fold in the coming rabi season.

The focus will be on more sowing, primarily in the Gangetic plain and the northeast states. And, to explore the possibility of a buffer stock of 1-1.5 million tonnes, equal to a month of consumption. India annually produces 18-19 mt. The crop is cultivated three times a year, starting January — kharif, late kharif and rabi. Annual sowing is one to two mn hectares. Around 60-65 per cent of the total production or 11-13 mt is during the rabi season; this crop is harvested in April-June.

Onions produced during rabi can be stored for a longer duration as compared to those coming at other times of the year. Every year, seven to eight mt of the rabi onion is stored till October-November.

Last month, prices surged in several retail markets across the country, to around Rs 80 a kg, due to shortage in the country’s main wholesale market in Nashik. The Centre then raised the minimum export price to $700 a tonne and also ordered the import of around 10,000 tonnes. The first tranche of around 1,000 tonnes is expected around the first week of next month. Another 1,000 tonnes could come by the second and then the third week of October. 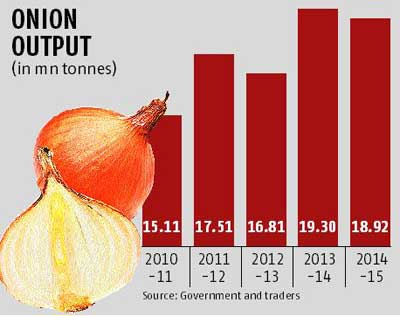 Meanwhile, to encourage growers to plant more during the coming rabi season, the Centre has decided to place advertisements in newspapers and other media to popularise the cultivation.

“We should encourage farmers to grow during the rabi and also look at scientifically storing these,” agriculture secretary Shiraz Hussain said on Wednesday, at the two-day annual rabi conference on Wednesday.

The government will also look at promoting production of hybrid varieties.

On potatoes, officials said there was a need to develop a national portal for market intelligence, for transparent pricing and help in curbing speculation. “There is need to promote inter-state trading in potatoes and encourage an alternative cropping pattern,” a senior state government official said. Potato is mainly grown during rabi; total annual production is 44-46 mt.